Hertfordshire was the safe haven, but it took me six months to know that we are safe here.

A holiday to Britain to visit family turned into a permanent political exile for Zimbabwean Hilda Chieza, who eventually found a permanent home for herself and her son in Hertford.

Hilda grew up in Harare, in a family of strong Christian faith. As a young teenager, following the independence of Zimbabwe in 1980, she was selected for a trial of integrated education. (Prior to independence, education was completely segregated and only 3% of African children attended secondary school.) “We were the first group of black people going into the English curriculum… there were not many who were accepted to learn with the English people, so that’s when I experienced racism highly… If you want to go to the toilet, it was black only, and you would queue knowing that the other toilet is free.”

Hilda did well at school and afterwards found work as a dental nurse, a role she held in Harare for 25 years. By the late 1990s, Hilda was a single parent to her son Eden and in a relationship with a soldier, who had been trained by the British. Much of her time was spent in caring for her elderly parents, and following the death of her father, Hilda’s sister invited her to take a respite break and visit her in Wolverhampton. At the time, President Robert Mugabe, obsessed with a perceived threat of British recolonisation, was engaged in a mass hunt for British spies. During the visit to Britain, Hilda’s boyfriend called and warned her that her name was on a list of people to be questioned. “He said, “Don’t come back.” So, he must have had some intelligence that they knew I was out in the UK. Technically it was not safe for me to go back.”

Hilda moved to Cardiff to enrol on a dental nursing course and after three years had received the qualifications she needed to support her extensive work experience. It was during this time that her son Eden joined her and Hilda was accepted on a nursing course at the University of Hertfordshire.

The move to small town Hertford, in 2003, was a complete change for Hilda and Eden, who had formerly only lived in cities; Hilda recalls a family visit and checking out the shops in St Andrew Street: “There were about five people in there and the place was full! My son said “Are you sure we are going to be ok here? The shop is full, five people!”

Hilda began attending services at many of Hertford’s different churches, looking for the right fit: “We tried Hertford Baptist Church, in 2003, and boy, that was THE place, and we felt welcomed, we felt accepted.” The church provided a social outlet and sense of family for Hilda and her son, with Eden joining the Young Life group and both forging friendships amongst the congregation.

Hilda wanted to give back to the church and the community who had welcomed her family and began volunteering with Young Life, the Street Pastor scheme and Christians Against Poverty. She found her work with Future Hope, a group aimed at safeguarding and supporting young people outside school hours, particularly rewarding: “Where the teenagers are not in a good place, at home or at school. They roam around the town intoxicated, so we had to learn how to comfort them, how to support them, how to make them feel loved and accepted. There are quite a few who were physically abused, mentally abused, alcohol abuse in their home. Lots of the parents they were working nightshifts, or, too tired, and they don’t see their children.  Sometimes we were actually helping them with homework, yeah, so that was really, really, rich for me to be involved in that movement.”

As a single parent in a new country, Hilda felt the pressure of raising and protecting her son: “It wasn’t my intention to stay in the UK or to bring my son from Zimbabwe. ‘Cos I thought education and culture as well, was much richer than bringing him over here… In Zimbabwe we have this saying “Community raises a child” Here, it’s totally different… It took a while to build that connection, support network.  So, the church helped quite a lot on that note, helped me to be comfortable, to know that my child is safe.”

Hilda’s own school experience and the low level of ethnic diversity in Hertford in 2003 did initially make her anxious for her son: “It was my biggest worry… I didn’t want him to go through what I went through.”  Eden attended Sele School and through his involvement with sport and church youth groups, he soon made friends. “Having a kind heart and being patient as well. And he was also sporty, sport’s international, as long as you score, as long as you can kick, then you are in! So, that’s really eased a lot of my anxiety, knowing that what I went through, and it wasn’t compared to that, not at all. Hertfordshire was the safe haven, but it took me six months to know that we are safe here.”

Asked how she had managed to find the energy to undertake all her community work alongside parenting, work and studying, Hilda credited her faith and the joy she took in helping others: “It’s more rewarding when you are enjoying what you are doing, for the benefit of others who are struggling, there’s more joy. You’re fatigued. God does it in a different way. He gives you the wisdom to know how to do it and gives you the time and gives you the opportunity as well, and gives you the strength, you know, so that has been my journey… Now I’m not feeling very well, you know, in my illness… The Home Group (at Hertford Baptist Church) were taking turns cooking meals I would freeze, and I had some issues with the hospital transport, so they jumped in again to take me to different appointments. So, in a way, God remembered all my sacrifices, now that I am disabled, I am a cheerful receiver!”

Hilda passed away in July 2022 following a long battle with cancer. Like everything in Hilda’s life, she faced her illness armed and comforted by her faith and sense of humour, supported by her Church, her son Eden, his partner Sarah and their children, of whom she was incredibly proud. 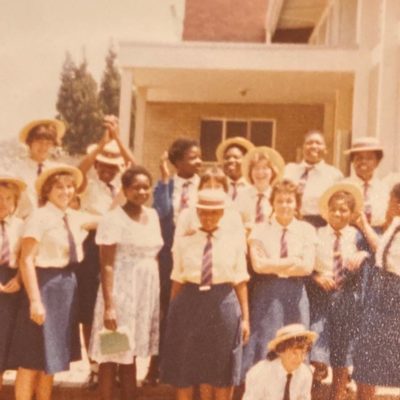 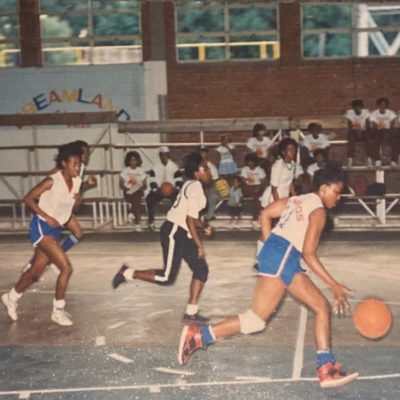 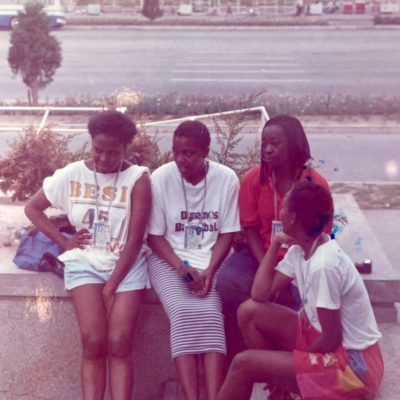 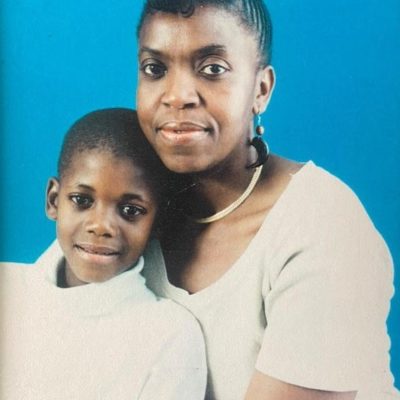 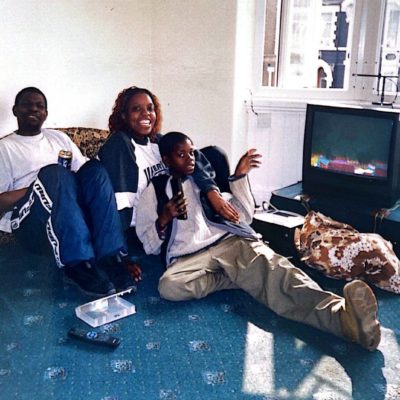 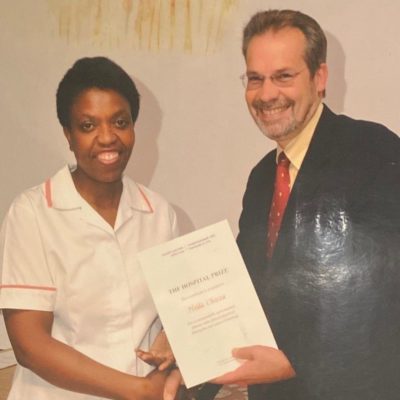 Hilda receiving her Certificate in Dental Nursing 2003, just before the move to Hertford. She also won the Dental Hospital Prize in Theory and Clinical Practise and the Glaxo Smith Kline Prize for the highest practical marks. 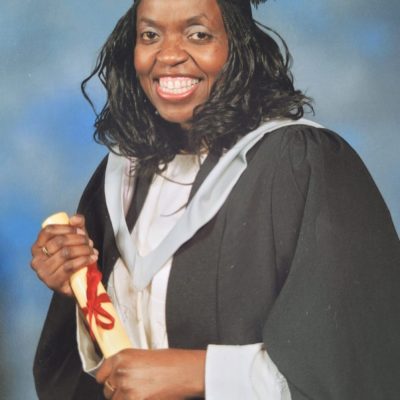 Hilda graduates as a qualified nurse from the University of Hertfordshire, 2008 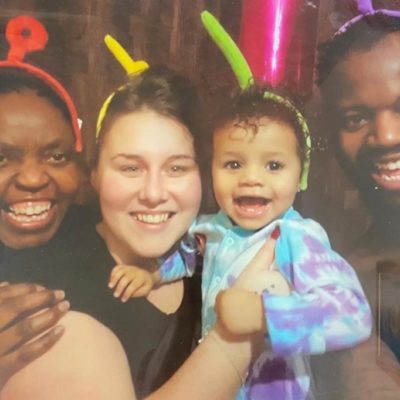 Hilda, with her son, daughter in law and first grandchild.

Joining her Church and volunteering in the community

Political exile, experiencing racism in Zimbabwe and how this impacted her concern for her son growing up in East Herts 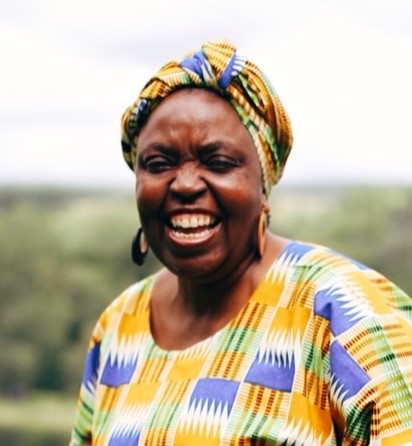