I thought to myself, well, I’m really lucky, you know, I’ve come to this lovely town.

Hazel and her first husband, Islwyn “Tom” Thomas, had been living with her parents for four years in East Ham whilst saving hard for a deposit for their own home. “We used to walk along past the pub, you’d hear laughter and music play and you’d think, oh, I’d love to go in and join in, have a drink, and we’d have to carry on walking. We couldn’t afford it if we were going to save, you know.”

The plumbing company Tom worked for was moving its operation to Marsh Lane in Ware and so the couple began to look for a new home in travelling distance. Tom spotted a placard, advertising plots being sold by the Council and got straight on the phone to reserve one. For £600 the couple had purchased a third of an acre plot on the only partially constructed Sele Farm estate.

Hazel and Tom had no previous building experience: “We were absolutely green, you know, to design the house we just sat down and drew a square and put squares in the house. We just wanted our own home.” However, a chance meeting with a trainee architect at a work dinner led to professional plans for the house. The couple’s luck didn’t stop there; when visiting the site, a builder approached them who was constructing his own home on the other side of the road. He offered to build Hazel and Tom’s at a low price. Mr Vigus, a farmer at Hertingfordbury, also came up and ploughed the gardens for them free of charge.
“We were so lucky. In those days, you see, people did things without thinking of how much is it worth.”

Sadly, Tom passed away six years after the couple moved to Hertford. Hazel had been working part time as a typist at the County Library but needed a full time job to make ends meet. Her neighbour, a police officer found her a job at Hertford Police Station in Castle Street, which she enjoyed very much but found it wasn’t paying the bills. She moved on to work as a secretary in the County Surveyor’s office in County Hall.

Happily, Hazel remarried and had a daughter. She has been an active member of Hertford Art Society for many years, enjoyed playing tennis regularly at County Hall and still plays golf. Hazel has always been proud of Hertford’s county town status: “When you drive down from London you know you’ve got to Hertford. It’s a compact town, it’s a county town. It should be a question of the residents being proud of it.” 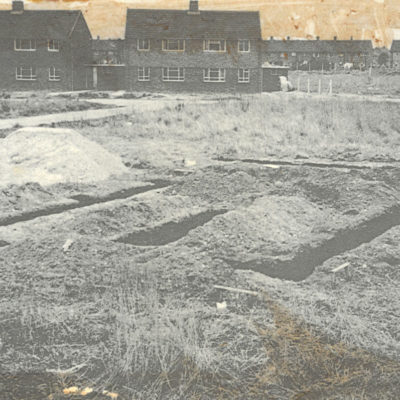 The foundations dug for Hazel’s new home at Sele Farm, 1959 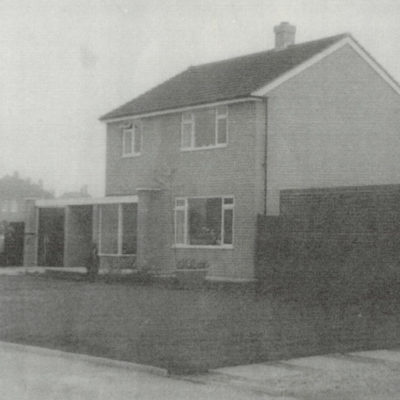 Finding a plot in Hertford and building the house

Moving to Hertford and finding work