Even now it is hard… you are a grown up and sometimes it is difficult to accept help because you can do something on your own, but at that point it was wonderful to be cared about, to be cared for, to be looked after, because those two months we could not think straight.

In February 2022 Vera Tytova was living a normal life in Kyiv with her teenage son Denis and fiancé Max, enjoying her job as Accounts Manager at a telecoms company, fitness classes and training to climb Mont Blanc.  Everything changed the morning of February 24th when Vera awoke to news that Russia had invaded Ukraine.

Vera raced across the city to be with her son Denis who was staying overnight with his grandmother. Her fiancé Max, a mountain guide, away working in the Carpathian mountains, called to say he was already on the train home to join her. “That first day, at first you don’t realise, I started to work even, and in the middle of the day… sirens went off and I didn’t understand that this, it’s not normal anymore. I cannot stay like this and do some work and sending emails so I stopped. I called my manager to ask what to do. “Do what you think is best for your family and for yourself. Just go!””

Vera, Max and Denis were invited to join a group of friends staying outside the small village of Belogorodka, about 15 km outside the city. After three days holed up in the house, the group were in dire need of food, water and fuel. The adults had “an awful discussion in the kitchen, who is going, because we didn’t know how dangerous it is… We thought it would be too risky to have people from the same family.” Vera and one of the men spent four hours searching for an open supermarket. The shopping was interrupted by an air raid siren and they had to evacuate; fortunately, the troops that appeared were Ukrainian and they were able to complete the shop.

The daily sound of gunfire, sleeping fully dressed in case they had to run, news updates detailing explosions and atrocities committed by Russian troops, all took their toll on Vera: “I understand that I cannot go on like this… I cannot just sit still, I had to do something.” The family left the house to travel to Vinnytsia. Denis, who has a learning disability, was very distressed, but able to remain calm through caring for the elderly family cat, Varya, throughout the twelve hour car journey.

At Vinnytsia, there were buses to take people to Poland and they met up with a group of people they knew. However, Max was unable to travel further; all Ukrainian men had to stay to fight the invasion. “When I was on the bus I was thinking “Did I say the right words?”… I did not know when we will see each other again.”

Whilst in Poland, one of the group was invited to stay with family in the French village of Nogent le Phaye: “She said: “Look, I have fourteen people with me!”… and they decided to help and have us over. And another 24 hours and we were in Nogent le Phaye.” For the first time, Vera and Denis felt safe going to sleep, at a medical centre requisitioned for refugees. “I was overwhelmed by the number of people willing to help and willing to share with us. In Poland in the bus station… they were just asking “Ukrainian? Have some soup… How many sandwiches?”… And these French people they started to bring clothes and food… and they were saying “How are you? We are supporting you.””

The French language was difficult for Vera and in the small village, there were no kids Denis’ age: “He was isolated and I wanted badly for him to get to know other people, to do something which he would be proud of.” An old friend of Vera’s she had met in London when a student, called and explained that whilst she had her own Ukrainian family staying with her, her neighbours in the village of Stanstead Abbotts wanted to help. A phone call to Abi and Anton, their prospective hosts, and Homes for Ukrainians application completed, Vera and Denis arrived in East Herts.

“Because the language for me is easier than the French one I felt more independent because I could go places… Our hosts provided us with bikes and we can have nice rides and trips along the canal, we do it for hours on weekend.  Denis is now able to work at Mudlarks Café, where they welcome people with special needs and there is supervision.”

Asked about her life here, Vera says: “Here, everything is thought of what to do next. You know, by the government, by the council, by the social services. So, you understand what to do next.  And also, I was surprised how nice people are, even at, you know, like at Job Centre… Sometimes I go in the morning, running along the canal, and people, I don’t know them, they smile at me, “Good Morning”, and that is something that is not completely the same in Ukraine… As I said to Max, even dogs are very polite, they don’t bark, they don’t run after you! And I feel… safe going, even when there is nobody around in the fields, Denis and myself, doing walks, and I feel safe, I feel calm and reassured that everything is fine.”

Vera went back to Ukraine for a week in June to marry her fiancé Max. With Marshal Law in place, there was no waiting time and Max queued at the registry office whilst Vera got a haircut: “I was cutting my hair and then he called me and he said, “There are just two people before us, go back! Run!” It was not the wedding dress, it was just a regular dress. We did not have guests, it was just the two of us… We had a bottle of champagne in the park, just two of us enjoying the day and, you know, hoping for a better future.”

Vera and Denis hope to return home as soon as possible but in the meantime she continues to support her friends and family still in Ukraine, many living in her home town of Nikopol, opposite the much attacked Zaporizhzhia nuclear power station. “We can do what we can do for our country. At the moment it is to support our people. Sometimes I have very long phone-calls with those people just to listen.  They have to speak out, you know, just to listen to them. Afterwards I need to talk to somebody else, just to lift this emotional pressure from me. And my hosts, Abi and Anton, are very supportive.” 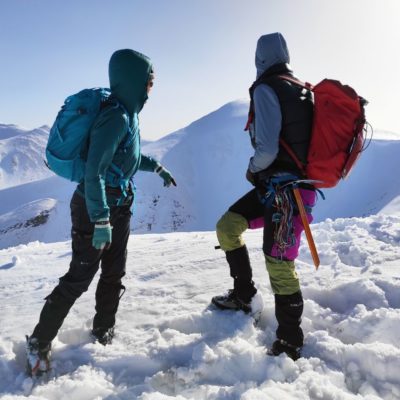 Vera and Max climbing in the Carpathian mountains, January 2021 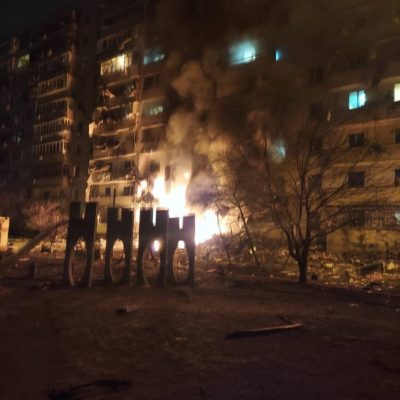 "The house just like ours, first month of war, we were starting the day by asking family and friends: "Are you ok?!" and happy to receive just: +" Kyiv, Obolon district, February 2022

Boarding up the house in Belogorodka to protect against gunfire, March 2022

"On our way from Belogorodka to Vinnytsia, my son was so scared that I made him listen to the music just to distract from the road" 3rd March 2022 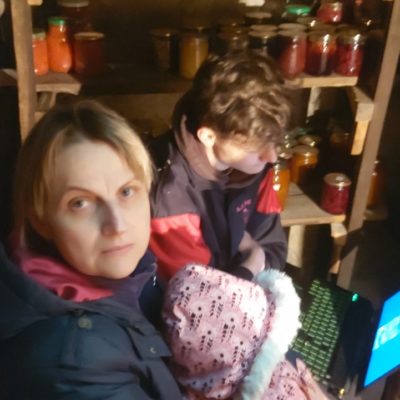 Vera's friends, the Scherbyna family, in the basement waiting out the shelling, Kyiv, March 2022 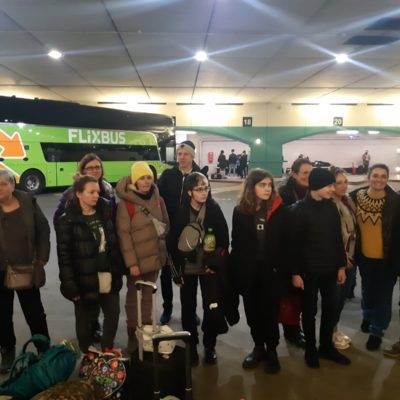 Twelfth day of the war, arriving in France after five days on the road 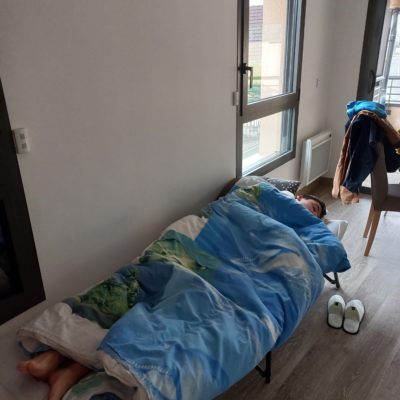 Finally, a good night's sleep at the medical centre in Nogent le Phaye 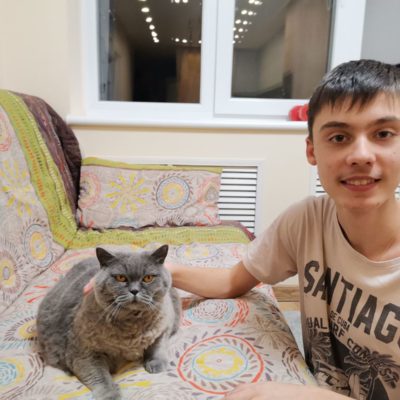 Varya the family cat. After helping Denis make the journey out of Ukraine, Varya's trip ended in Poland with a new family as she had no papers to continue to France 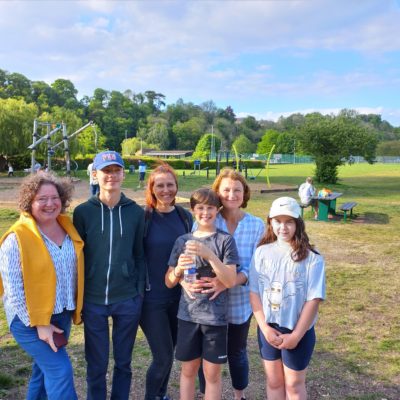 Host Abi, Denis and Vera with Yulia and her family at Hartham Common 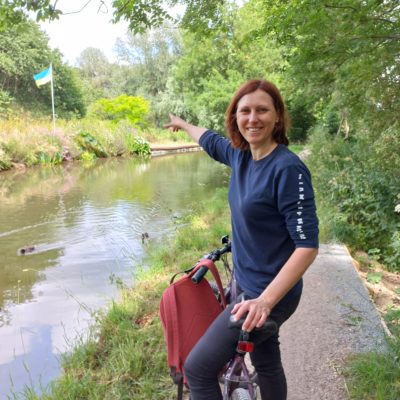 Vera spots a Ukrainian flag whilst cycling alongside the River Lea 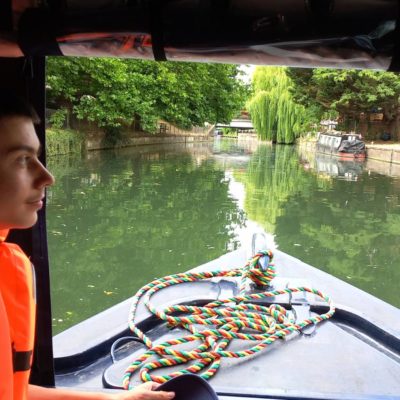 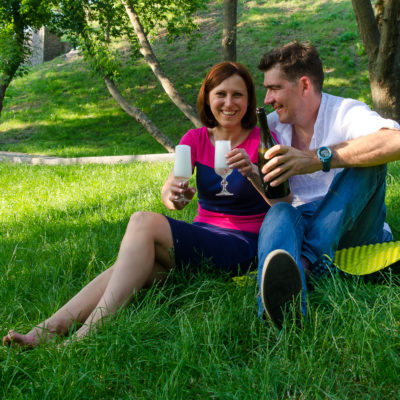 Vera and Max on their wedding day, Kyiv, June 2022

The first three days of the war

Read Vera’s memories of hiding out in Belogorodka

Vera describes the journey from Belogorodka to France, via Vinnytsia and Poland

Read Vera’s memories of settling into life in East Hertfordshire

Supporting loved ones in Ukraine

Read Vera’s account of the importance, and pressure, of supporting loved ones in Ukraine 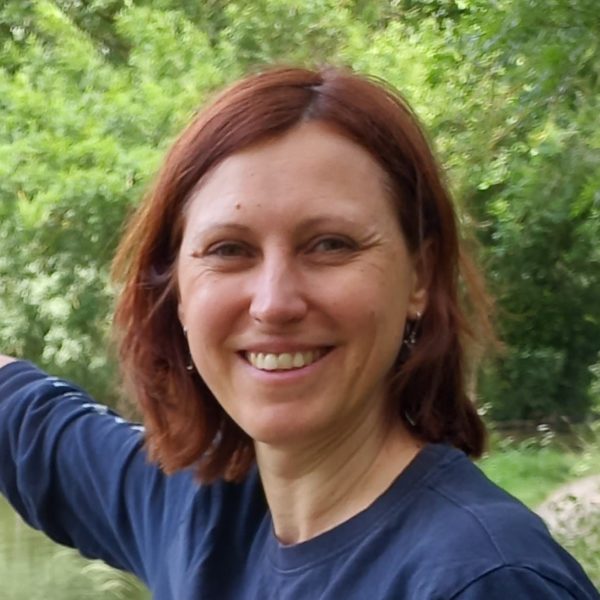